The first time I met with K-kun, I got the impression that he was a tall good-looking guy.
However, he was transformed into the Beast K right as he entered Moi dix Mois!
huhuhu…
Posing with his tongue out like Gene Simmons became his trademark! 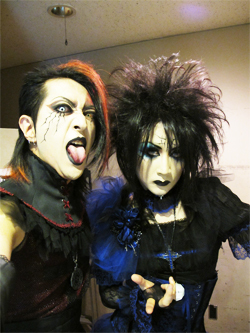 Upon joining Moi dix Mois when K-kun was announced for the first time at a live, music related officials who came to see it gave soaring praise, saying “That new guitarist, at first glance seeing how tall he was, I thought thought you added a foreigner to your group! He has an amazing presence!” .+:｡(*^-')b Yay!

Ah, I might have forgotten to tell K-kun about that, so read this now K-kun!

So today with Coca-Cola ZERO (They have things like Strong5.0GV lately!)
or an energy drink, make a toast!
Hamburgers too!

February 1, Kami’s birthday.
I’ve got to liven things up with a MALICE story! A long time ago…
Kami) They have hamburgers at Glicore!
Mana) What! I’ve never heard of such a thing!
Kami) There do! Its like Lotteria, they’re connected to Glicore!
Mana) What the! Really~?
Kami) Yeah it isss!!
Mana) But I’ve really never seen or heard of that before~.
Kami) Yeah there iss! and then the story at that time ended.
At that time there wasn’t anything like the internet so I couldn’t easily investigate it, but in recent years I became interested and when I tried googling it, they do have them at Glicore! Sorry Kami! <(_ _*)> 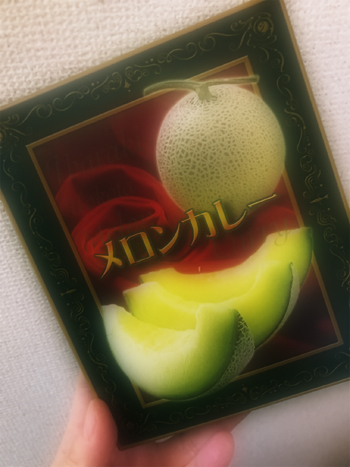 **Note** Glicore and Lotteria are both famous fast food chain restaurants in Japan.

Recently Mana has been posting more on twitter than on Monologue Garden, so for those who want to read my translations of all his tweets, please feel free to like my Mana-Sama.net Facebook page. I think it reaches a wider audience much faster, but for those who have been keeping up with this page for some years now may not know about it. The link is as follows:
https://www.facebook.com/ManaSamaNet/

I'm enjoying reading your thoughts! Doesn't the Madousho have so much to discover? Here's a signature shot with my J:f just before the live! Since I think you might feel like *downward of the equipment car? I added a little bit easier to understand postscript.
madousho.blog.fc2.com

There is an item called "†Mail to Mana" on the bottom right column of the blog for your thoughts.
Please send me your comments, thoughts, feelings, etc... at any time! I'm waiting for them!

There are of course live photos, and that forbidden maid guise, etc which are all worth seeing and reading! Please enjoy

If I recall correctly, Kami was the youngest among the members!
In MALICE MIZER photo shoots he would turn over my skirt when I would wear mini skirts (smiles)
Kami…was a mischievous pubescent boy! It was an innocent type of act so it was somewhat sweet.

At the time when Kami joined MALICE MIZER his hair was short, but while looking at it in total amazement, his hair grew out down to his back and it became really glossy long hair! Before I knew it my hair length surpassed his.
A-actually, why was I so attracted to women's clothes? hmm~ its a mystery (smiles)

And then, during the indies time of MALICE MIZER at the "Uruwashiki kamen no shoutaijou" event (Its was a special event where each member did skits, performances, etc…) Kami had the chance to do special effects make up, but (now I think its the late Takadanobaba's Arenos Hall) the night before the event I got a call from Kami saying… "Mana-chaa~n I don't know if I can do a very good job at art make up for that day, so can you come over now and do my make up?" I cheerfully went over to Kami's house and painted half of Kami's face white for art make up… the concept was a mask (two-sided). Its the theme from Kami's early days.

It was like there was a mask under this mask…

He said that I was a make up magician, and so for me it felt something like "Would you like to decide on a course, customer?" (smiles)
[I think] It felt like Kami got into it and could finally sleep safely in the beauty parlor? But I didn't sleep.
Painting the moon on his face and this and that…huhuu didn't I do a really good job? Kami!
Anyway, on that night Kami went to sleep just like that with his art make up on and then proceeded on to the event the next day.
Some how that scene was so cute… Ukeru!
I really can't run out of stories…

Since I can't run out of stories…how about we all noisily gather at the 90's visual kei cosplay holy ground, Harajuku's Jingu Bashi in MALICE cosplay~!!!
(I'm joking)

Well then, we will gather on August 7 at Akasaka BLITZ!

Today I hope you will drink melon type drinks (MAX coffee is good too)
and eat while coming alive with Kami stories!
I hope you will have your fill of the cool drummer Kami with MALICE MIZER CD's, DVD's and even while watching the Shinwa video, etc!
Those of you who can drink alcohol, you can even drink Calpis Milk. Although Kami had a boyish presence, he liked alcohol milk!
Hes cute like that (smiles)


**Translation note: I kept all song/video titles in Japanese as they may be easier to understand in that way. I also kept "Ukeru" in Japanese because if I'm not mistaken I believe its supposed to be a play on the word Mana has often used in the past for Kami, which was "ukyo, ukyo"

October 23, 2016（Sunday）We have decided to do a one man live in Hong Kong！
http://vrockhk.com/2016/06/10/moi-dix-mois …October Advent Hong Kong/
Inquiries：contact@exclamusic.com

Honestly I still don't understand now whether these two years time have gone by quickly or slowly.
Because he was a partner who was always there for almost 10 years and then suddenly he was gone.
K-kun died and then approximately half a year later Ryux joined, and somehow we were able to move forward.
Ryux is a man, but he seems like a younger brother and hes such a reliable guy.
Even now under these conditions fans still can't sort out their feelings, and keeping up emotionally while seeing Moi dix Mois go up on stage must be difficult.
At the lives a scene of K-kun imprinted somewhere in everyone's mind sporadically passes by in the midst of it all, and Ryux has felt he had to enjoy the lives unaffected by it.
He is together with the wicked one.

Of course it might be a complex feeling, but he has been able to change that sadness to smiling faces.
Its been about 1 year since Ryux joined too.
I decided I want to welcome the support Ryux has given me up to now with a group photo on the top page of the Moi dix Mois site.

I want us to engrave this day in our memories today and move forward again as one.

K-kun is probably keeping a kind, no, a proud beast evil eye watching over the 5 of us from behind.

Because K is an eternal Moi dix Mois member.